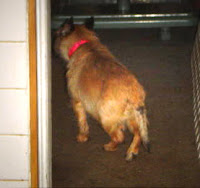 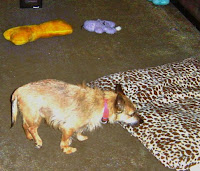 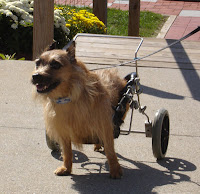 Here is the update from the lady who adopted him:

In March, an amazing and wonderful thing happened.

I was in the kitchen, cubing chicken breast for dog treats. Five sets of terrier eyes were fixed upon me as I worked, when the doorbell rang from the living room. In a flash, I was abandoned. As I turned to set down my knife and go to answer the door, I looked down. There, at my feet, eyes steadfastly on me, was Rocky, standing on all four legs and slowly wagging his tail from side to side.

Rocky came to live with me at the end of December last year. A friend told a friend about this small golden terrier who was living with the Rhode Island SPCA. The friend told me his story and sent me pictures of this tiny fellow, who was paralyzed in the hindquarters and had been in need of a permanent home for almost 2 years. Through the efforts of the dedicated members of two separate rescue organizations with a passion for little terriers, the SPCA staff, and a devoted volunteer dog social worker, Rocky was delivered to me on a snowy evening just before Christmas.

He let me know right away that he was something special. Although his body was damaged, Rocky was a completely normal terrier in every other way. He liked to play tug; destroy toys; play bow and wrestle with my other dogs. He would do anything for food. And to a limited extent, he could and would behave like a truly housebroken dog. He loved to be petted, and was always ready to give little kisses. He was good about nail trims and grooming. He wore his diaper when necessary, without complaining.

I found that he had sensation in his feet, and was able to move his back legs, although the muscles were atrophied from disuse. His hind legs were usually crossed, because the muscles on the inside of the thighs are stronger that the ones on the outside. He mostly moved by dragging his hind quarters. He was very mobile in his little "wheelchair" which was provided with him; his upper body, like that of so many paraplegics, was very strong and muscular.

I started doing strengthening exercises with his legs. Standing him up gently, bearing weight for as long as he could manage. At first it was only a few seconds. When he was able to stand for a minute, I started working on his sense of balance, by rocking him side to side while standing. A dog that has gotten used to falling over and dragging himself has to break the habit and learn that balance all over again. Four times a day, with an hour or so of free time to practise what he had learned on his own after each session. I began to see him walking short distances, and standing up on his own from time to time.
Through all this however, his tail was limp and hung down. That day when I saw him deliberately lift his tail and wag it slowly, all on his own, I knew he was going to walk again someday.

In April and May, he has traveled with my other dogs to several states to watch my Westie and I run in agility. When I start to load dogs into the motorhome to leave, he starts barking and howling, until he is put into the vehicle. He is a good traveler and he is not about to be left behind. He greatly enjoys meeting the public in the parks where we have been. He loves to be petted by children, and they are drawn to him as well. I tell his story, and he is doing his bit as an ambassador for the work of the SPCA. He is still not completely perfect in his walking. His front can go faster than his rear if he is excited. I made a little harness so I could restrain the front and balance the rear, to help him practise. But, he is a terrier. Some days he will work on this, and some days he is not interested.

My hope for him is that first and foremost he is a happy dog who knows he is loved. If I can help him to walk well enough so that he can do Earthdog events, it will be the greatest thing I can imagine. I look at him and realize every day how lucky I am to have him. 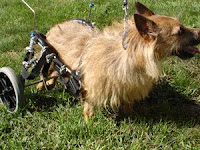 THANK YOU FROM THE SPCA STAFF -

We miss the little guy!