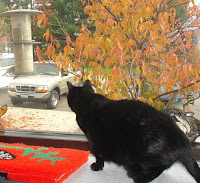 Shadow watching the birds from the Cat Room's play area.

A study by the Journal of Applied Animal Welfare Science found that black cats were about half as likely to be adopted as tabby cats and two-thirds less likely than white cats. Whether due to superstitions or just preference, this situation is seen in shelters across the country.
And the RISPCA can be included, as we currently have 18 black cats in our shelter. It's so unfortunate that they are overlooked many times, as our senior cats are too.

Read the article in the Seattle Times "Black cats unlucky at shelters"
Posted by webmaster at 1:50 PM