*Marvin out on sick leave for two weeks* 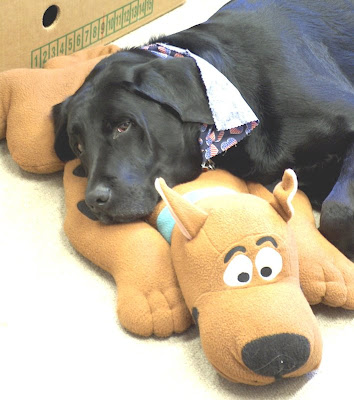 Last Wednesday, Marvin became sick and was brought to Dr. Bruzzi, who examined him and found an abdominal mass on his spleen and liver via radiographs. We then contacted Dr. David Sweet who is a friend of Marvin. He suggested we have Marvin's abdomen ultra sounded to be more specific about the mass. The ultrasound confirmed a large tennis ball size mass on Marvin's spleen.
It was then decided by Dr. Bruzzi, Dr. Sweet, and Dr. Finocchio (Marvin's owner) that surgical removal was in the best interest of Marvin, with hopes that the mass was benign and not malignant. Marvin underwent about 3 hours of surgery on March 24th to remove his spleen and nodules on his liver.
He came home today and is still a bit under the weather but happy to see Mr. Bear and all his other stuffed friends and of course he couldn't wait to put a tennis ball in his mouth, slowly but it was a morale booster for his dad.
We want to thank all of Marvin's friends, his fellow employees at the RISPCA and everyone who has sent their prayers and best wishes, especially, Dr. Michael Bruzzi and his staff at Dighton/Reboboth Animal Hospital, Dr. Newell who performed the ultrasound at Ocean State Veterinary Services and Dr David Sweet and his staff at Bay State Veterinary Emergency Services .
Now all we have to do is keep our paws crossed and hope that the tumor is benign.We will continue to update you on Marvin's progress in the days ahead.
He will be out on sick leave for two weeks.
(cross-posted on both blogs)
Posted by webmaster at 3:16 PM

Marv is really "everybody's dog" at the RISPCA because we are all so crazy about this gentle, sweet boy. He has done so much for so many sick animals,comforted children in the hospital, and welcomed countless visitors to our shelter.
He's simply the dog that most people wish they had because he's such a gentleman.
Get well soon buddy..